Miles Moulson’s father William b1775 was one of three brothers who were said to be the first generation of Moulsons in Bradford. The family established themselves as stone masons, quarry men and building contractors and at one time were the largest contractors in a town’s population was growing from 1810 at a rate of something like 50% every ten years. There was certainly a demand for stone masons and builders to build the mills along with their towering chimneys, the churches, schools and civic buildings. The Moulsons tended to concentrate on some of the larger projects.

William Moulson was born at Holme Top in Bradford. William’s two sons Miles (1806-1856) and John (1798-1868) were both shown in the 1841 census as being stone masons. Between them the family established a contracting company in 1825 and in 1851 it was said that they were the largest building contractors in Bradford.  Over subsequent years the company would be passed down through the family with a significant number of other family members being involved.

In 1852 both Miles and John’s eldest sons joined the company, these were Miles’s son David Moulson (1829-1899) and John’s son William Moulson (1825- 1904). This William Moulson the grandson of the first generation, William would take an active interest in local affairs and would go on to become Mayor of Bradford in 1888-1889 and Alderman.

When Miles Moulson died in 1856 he was laid to rest at Undercliffe Cemetery. A magnificent stone carved monument marks his grave which has been granted a grade 2 listed status. The monument was made by John Throp, a sculptor originally from Liverpool but who was working in Leeds. He is also known to have created the statue of Henry Rowland Marsden (Philanthropist and ex Mayor of Leeds) that now stands on Woodhouse Moor. Some of his other works were exhibited on a number of occasions at the summer exhibition of the Royal Academy of Arts. The Moulson monument is described as a corniced pedestal supporting a gracefully carved figure of a mourning girl leaning on a garlanded, fluted neck vase.

After the death of Miles, the business began operating under the name of John Moulson & Co.  It had established a considerable reputation and was very well respected. Since its formation it had won many contracts. One of the first contracts was to erect Britannia Mills in 1836/7 at the behest of Mr Ellis Cunliffe Lister for Christopher Waud & Co. They also won the contract to construct the Bowling tunnel on the Lancashire – Yorkshire Railway. They extracted the clay from the tunnel and used this to make sanitary pipes and the old Victorian style chimney pots.

The firm won contracts to build large portions of Saltaire for Sir Titus Salt, including the bridge over the river and canal, the warehousing, combing sheds, offices, dining hall, stables for the Mill and the Congregational Church. At about the same time they were engaged in the building of Barkerend Mills for Messrs Garnett, Lumb Lane Mills and sheds for James Drummond.

The firm also built Horton Lane Chapel, a building that was designed by Lockwood and Mawson.

The Moulsons owned two quarries, one at Thornton and one at Ringby near Halifax along with stone wharves at Thornton Station and North Bridge Station. 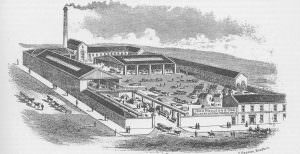 Several years after Miles’s death the Moulsons were involved in 1862/3 in the building of the Newlands Mill chimney which collapsed in 1882 due to settlement. Fifty-four factory workers were killed and many injured in this incident which was caused by settlement of the foundations. There were many stages at which this disaster could have been avoided but the owners of the mill insisted on continuing construction despite early signs of settlement, although it must be said, that some corrective measures were taken. Even days before the collapse there were signs of serious problems with masonry falling but the workers in the mill had to carry on, many of them were children.

In 1867 the Moulsons also built a chimney for Messrs Mitchell Bros at Manchester Road which was at the time was the highest chimney in Yorkshire reaching 110 yards, 100 yards above ground level. The plans were drawn up by Mark Brayshaw, architect of Old Bowling Lane.

When John Moulson died in 1868, his son William b.1825 took sole ownership of the company although he was later joined by his two sons Angus and Rufus. William was appointed Mayor of Bradford in 1888/89 and appointed Alderman and Justice of the Peace. His grave is located next to the Miles Moulson monument and unusually for a Mayor, it is away from the main promenade.

Sources of information. The Century’s Progress 1893, Rambles Round Horton by William Cudworth 1886, Bradford Observer 1867 and 1883, Necropolis city of the dead 2015 and census information.