The Lingards are descended from the family who farmed at Keelham Hall, Thornton. Robert, originally from Stansfield in Calderdale was the first Lingard to farm there. He married Sally Kershaw at Heptonstall and they had five children all boys. The eldest William is the father of Henry who founded the famous Bradford Store. The third of Robert’s sons, Thomas who with his brother Sam kept the farm going, was the father of John Henry who was the father of Thomas. ( see THE GRAVESTONE IN UNDERCLIFFE B436 Unconsecrated )

John Henry (B436) became a draper like his cousin Henry but lived in the Undercliffe area. John Henry’s son Thomas died at the Somme on the 1 July 1916 aged 21 years. FOR THOMAS SEE BELOW **

Henry Lingard and the Lingard Store
When Henry Lingard died on the 20 June 1903 aged 64, he had established a successful drapery business which over the years provided employment for a broad spectrum of relatives. He left over £174,000 which is remarkable as he was born to a man, William who was occupied firstly as a worsted wool weaver and later as a wool washer in Thornton.
Although the second son, he appears to have the business acumen to build a firm that employed his older brother, William and two younger brothers, Thomas and Joseph.

From humble beginnings as a hawker of fents, he later took a market stall in Bradford , Henry built his business and moved into premises in Westgate in 1875. He also moved his family from Denholme to a house on Midland Road, Manningham. Later he moves to Emm Lane, Manningham.

His business expanded and gradually he extended his floor area from Westgate through Baldwin Lane to Godwin Street until it totalled over 28,000 sq. ft. Although Lingards is often referred to as Bradford’s fourth store, it was believed by some to sell the most diverse range of goods. He reserved part to sell goods brought from Manchester and another that specialised in Bradford made wares. The list of produce included all types of cloth, table linen, children clothes, underclothing, lace curtains, bedding and all sorts of dry goods and hardware..

He was seen as being a good employer, taking a keen interest in his staff. Not only was he good to his staff, he was lenient with thieves. In 1900, a Mrs Virr tried to steal, a curtain, some shirting cloth and a pair of stockings. When caught she offered to pay and Henry was not going to press the case despite theft from the store having become rife. However, she did end up in the dock but was given just one day in prison which having served one day already, she was released.

On 30 March 1861, he married Elizabeth (Betty) Waugh. There was already a daughter Eliza Waugh which suggests she was not Henry’s child although in later years she is recorded as his daughter. On Henry and Betty’s marriage certificate, no father is recorded for Betty so it is difficult to accurately decide whether she was born a Waugh or had a previous husband. However there is a record in the Birth Index for Halifax for Betty Waugh for 1841 which fits when she would likely to have been born.
Henry and Betty have six children, Hiram, Asa, Mary, William, Julietta and Arthur. Hiram died in childhood and Arthur although he married never produced children. Asa, William and Arthur joined the business with Asa being the main partner. William moved to Harrogate where the 1911 census shows him as retired at the early age of 34. However, this may have been due to ill health as he died on 20 July 1913. He left his widow Annie a modest amount of £530 to raise their two children, Harry and Dorothy Grace. Likewise, Arthur and his wife Alice move to Menston and again the family is struck by an early death when he died on 27 February 1917. The 1911 census records him as a general draper, employer. He may have had his own business nearer home than Bradford.

Asa was a bit of character. He loved motor cars and in January 1904 was a member of the Yorkshire Automobile Club and was one of three members who put forth an argument to the Watch Committee concerning the implementation of speed restrictions within Bradford. As a result of their presentation, the Watch C was the driving force in the Bradford store. Asa born in 1869 married Ada Foster in 1891 and they had two children, Ann Margaret and Asa Foster. In 1901, Asa like many up and coming Bradford men of the age was living in Heaton at Park Mount and is recorded as a shop manager.

Committee decided to postpone the introduction of the regulations. This meant that it was for motorists to monitor their own driving. They were permitted to drive up to 20mph provided it was safe to do so.
Asa was the victim of speeding regulations when in June 1904 he appeared at the Walton-le-Dale petty seesions for driving furiously along the Blackburn – Preston Road, near Halfpenny Bridge. He was travelling at 26½ miles an hour. He was fined forty shillings and costs. His protest was recorded as being didn’t the police have better things to do than trapping motorists!

Asa stepped back from the business in 1935 to concentrate on his other passion, art. This reflected the number of donations and loans of art he made. This included the awarding a bronze statue of Perseus by Alfred Gilbert RA, to Bradford Art Gallery. He was also a prominant supporter of the Bradford Infirmary Fund and in 1940 he made a donation to the Bradford War Weapon Fund. From the date of his retirement, the store is run by the company’s chairman, Mr Richard Townson.

In 1923, Asa bought Elkstone Manor House in Gloucester which he owned until his death in 1957.

On 31 August 1940, Lingards store was bombed and completely destroyed. Subsequently, the store moved to premises owned by the Co-op at the corner of Market Street and Forster Square. News is vague as to where bombs dropped that night however a report recorded that 116 bombs were dropped in the Bradford area, resulting in one death and injury to an estimated 111 other people. As well as Lingards, the adjoining Kirkgate Chapel was destroyed. A bomb fell through the Odeon ceiling into the stalls and a warehouse in Crossland Street was partially demolished. Rawson Market was hit and many buildings had windows damaged and the tramlines were out of action. The newspapers reporting the bombing of the “North East” also stated that people were getting better at adhering to blackout unlike previously when lights were left on, torches were unshaded and used when people were leaving a cinema in a Northern town moments before it was bombed. There were also complaints that the air raid siren was not used until enemy planes had arrived or it was used when it was not needed.

On hearing that Lingards had been destroyed, one young lady regretted that there would be no further visits to its balcony cafe for tea and hot buttered tea cakes to listen to its elegant four piece orchestra.

Lingards shop on the junction of Market Street and Forster Square.

After the war the store moved back to premises in Westgate close to where the original store had stood.
In 1953, the Bradford business was sold to United Drapery Stores Ltd, however, it was agreed to retain the Lingards name.
Asa died on the 21 October 1956 leaving over £163,000 Neither of his children married.
His son Asa Foster learned to fly and received his pilots certificate to fly a bi-plane in 1917. He joined the RAF and twenty years after he had qualified to fly a bi-plane he received a further certificate to fly Avro Cadets. He became a flight lieutenant, however, the 1939 register records him as being retired. He received an MBE in 1943 and is decribed as being a member of the Air Transport Auxiliary.
When he died on 1 January 1971, leaving over £239,000, he was living in Hampshire.
The store was closed in 1977.

John Henry was one of the younger of Thomas senior’s sons and therefore had to find alternative work as the farm would only support one family. Perhaps his cousin Henry suggested he joined his drapery firm as John H became a draper and there is every indication that he had his own shop in Otley Road, Undercliffe. John H and his wife, Hannah (B436) had eight children, seven of which survived infancy. There were three sons, Herbert (B436) and the much younger brothers Thomas (“Tommy”) and Harry Smith Lingard. In 1911, Thomas was a warehouseman aged 16.

Thomas or Tommy joined up joined the volunteers, 16th Battalion West Yorkshire (Prince of Wales Own) Regiment, better known as the First Bradford Pals His regimental number 16/175 meaning he was the 175th to join up which when considering that 2000 joined the volunteer Bradford Battalions, meant he joined up quite early, possibly on the first day on 21 September 1914 at the old Mechanics Institute in what is now Centenary Square.

After his initial six months he and his fellow soldiers would have been sent to Skipton then to Fovant in Wiltshire before sailing in December 1915 to Kantara, Egypt for a battle that really did not happen. From there he would have been sent to France in March 2016 for trench warfare training before taking part in the first day of the battle of the Somme , on 1st July 1916.

Like many of the Pals, Tommy died on that first day, his body never found. His name is carved into the stone of the colossal “Thriepval Memorial to the Missing”. The battle was carnage for the British, including the Bradford Pals and it is unlikely that Tommy made much progress beyond his trench. The Germans were very efficient but some of their soldiers had to stand down because they could not stand the devastation they were causing. Tommy was only 21 when he died and many of the casualties would have been about the same age. Tommy is remembered on the stone of his parents (B436).

His younger brother, Harry S. Joined up in May 1916 and thankfully survived.

Also in grave B436 is an infant, May who died on 27 September 1884 aged 10 months. She is likely to have been the daughter of John Henry and Hannah. 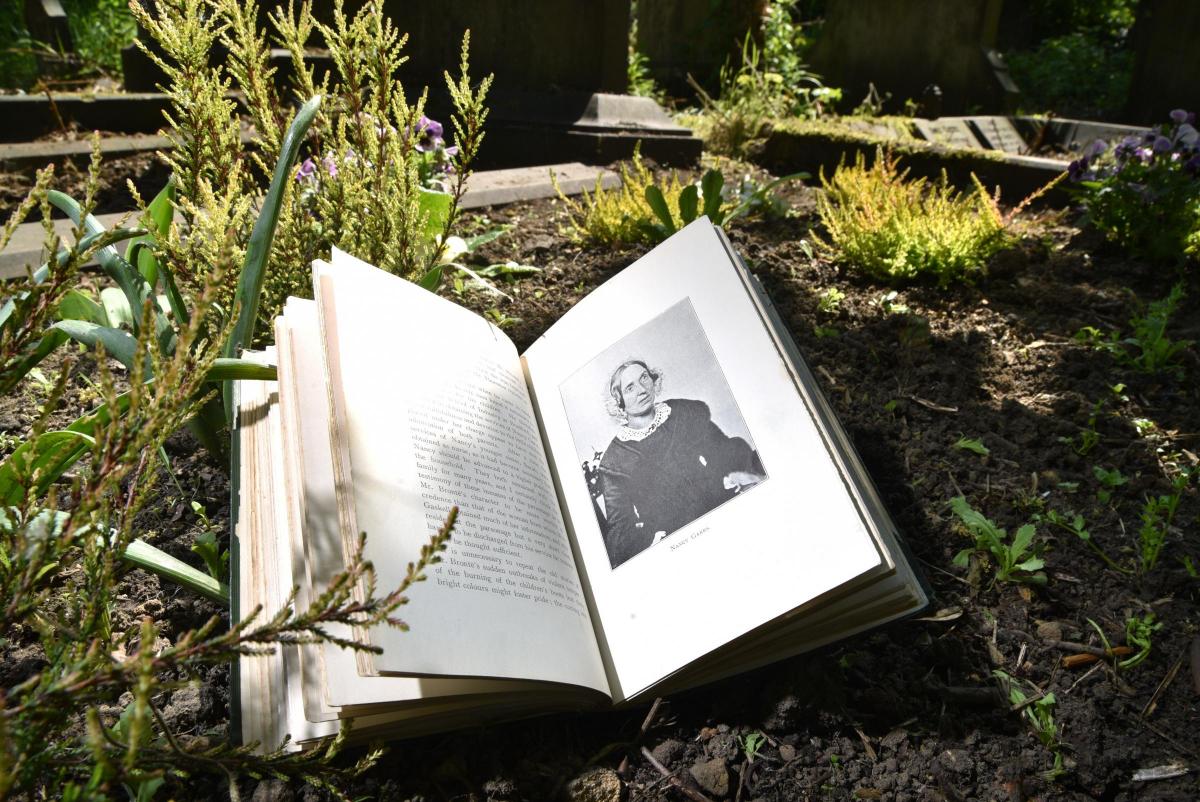