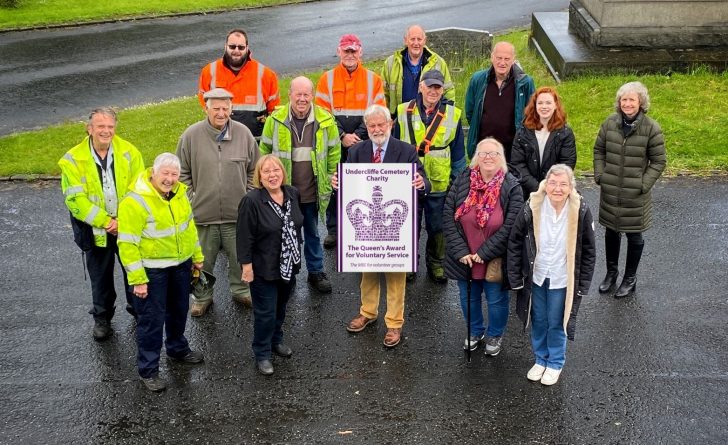 Undercliffe Cemetery Charity in Bradford has been awarded the prestigious Queen’s Award for Voluntary Service (QAVS) 2022 in recognition of its outstanding contribution to the local community. Equivalent to an MBE, a QAVS is the highest accolade given to a local voluntary group in the UK, and it is awarded for life.

For almost forty years, Undercliffe Cemetery Charity volunteers have been running the cemetery; no small feat when you consider the site covers 26 acres and has 23,000 graves to look after. In addition to the important task of maintaining the grounds and monuments and almost 300 Commonwealth War Graves, volunteers are also engaged in researching the stories and characters of those buried here: from wealthy wool barons to those who were less fortunate and buried in pauper graves. They also host regular tours and a cafe; make burial records more accessible; and ensure that plots are available for purchase and burial.

The Charity’s long-standing Chair, Allan Hillary, says he is ‘absolutely delighted’ at news of the award. Mr Hillary sees it as fitting recognition of the dedication of all those involved. Their work is particularly valued, as Undercliffe is one of the most important cemeteries in the UK, having been awarded grade 2* listed status, and widely acknowledged as being the outstanding cemetery in the north of England.

The volunteers see the Queen’s Award for Voluntary Service as the start of an exciting new chapter in their own history. There is always plenty to do and the Charity welcomes new volunteers to its friendly and proactive team

Background Notes:
Dating back to the 1850s, Undercliffe Cemetery is Bradford’s own historic sculpture park, hosting countless spectacular monuments, including an Egyptian-inspired tomb guarded by sphinxes in the ‘Historic Core’ area. A stroll around this magnificent site tells not only the stories in stone, granite and marble of those who shaped a prosperous Victorian Bradford, but also of those who endured the poverty, disease and squalor of the less fortunate. The setting of this iconic burial ground is dramatic, standing on a steep hill, with panoramic views over the city. It has been a magnet to film and TV directors over the years. The Cemetery has, therefore, found itself immortalised in such productions as Billy Liar, Peaky Blinders and, more recently, Ava and Ali.