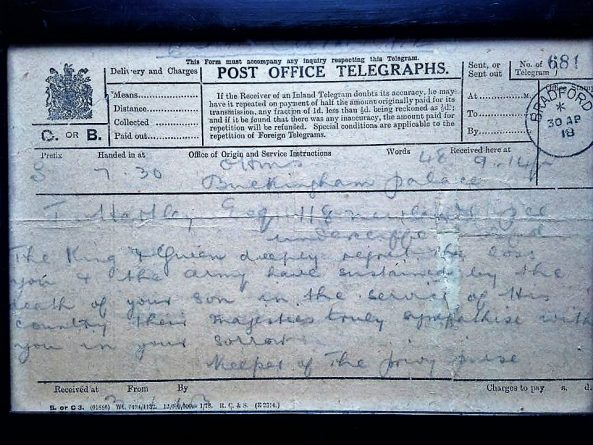 Harry Hartley returned home at the end of the First World War,

much to the suprise and delight of his family.
On the mantlepiece there was a letter everyone dreaded.

The notice, from the King informed the family of Harry’s death.

“The King and Queen deeply regrets the loss you and the army have sustained by the death of your son in the service of his country their majesties truly sympathise with in your sorrow.

Keeper of The Privy Purse”

Mike Berry, Harry Hartley’s grandson, called into Undercliffe Cemetery, to share his story.
Harry Hartley was born in 1896,in Newlands Place, just a few yards from the Cemetery.
As Harry grew up and went to school in Undercliffe and Bradford,the site must have been well known to him.

“He not only survived the First World War but came through the Second World War and eventually died, in 1974 at 80 years old”