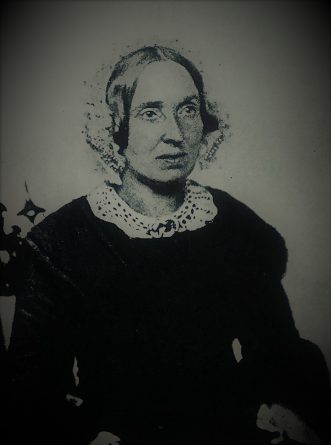 Undercliffe Cemetery Charity have launched a campaign to raise funds for a headstone on the grave of Nancy Garrs.

Nancy De Garrs also known as Nancy Garrs, was Charlotte Brontë’s nurse and is buried at Undercliffe Cemetery, in an unmarked grave. She was employed by Patrick Brontë soon after Charlotte was born in 1816 and served the family for eight years. Nancy and her sister Sarah looked after the six children as well as doing the household chores. After she left the Brontë household in late 1824 she married twice but when she reached her 80s she had no husband and no means of supporting herself. She was taken in at the workhouse. Her dying wish was that she didn’t want to be buried in a paupers grave, and after a campaign in the UK newspapers and the New York Times some money was raised. But it wasn’t enough to pay for a headstone. We hope to correct this and at the same time get Nancy’s contribution to the Brontë family recognised.

Nancy idolised Patrick and never tired of talking about her time with the Brontës. Patrick, Charlotte and Emily sent her gifts and she treasured these. These were her Brontë relics. She didn’t want to part with them, but in desperate poverty she had to. The fate of some of them is known but there were some very important ones such as a photograph of Charlotte on glass, which has disappeared.

When Mrs Gaskell’s book on the life of Charlotte Brontë was published in 1857 it criticised Patrick along with Nancy and Sarah. She defended Patrick’s reputation and the book was changed. Nancy had saved Patrick’s reputation and she deserves to be remembered. Nancy was a loyal and faithful servant. When Nancy and Sarah left the Brontës the children they were in tears. Patrick gave them both £10 as a parting gift.

Help us raise the money for a headstone and for the cost of the groundwork so that Nancy can be remembered.

To donate now please click on the link to Paypal below. Thank you. Please send us an email to say your donation is for the the Nancy Garrs fund.